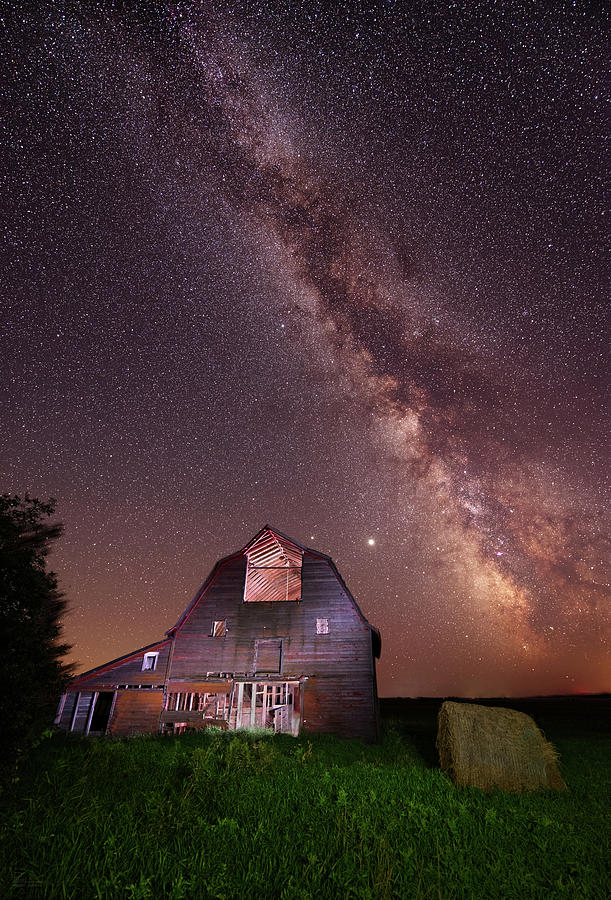 "Blackmore Barn Nightscape #2"
While up in ND helping with harvest, I went to a nearby abandoned barn (south of Leeds) to shoot some nightscapes on very clear night, so the Milky Way was glowing spectacularly, as it does from dark-sky sites like this. On some of the shots, I lit the exterior and interior of the barn by walking around with a very dim flashlight during the long (2 minute) stationary exposure used for the foreground. The star part of the scenes are created by combining ~6 30 second exposures where the camera tracks the sky motion, else the stars become streaks. Multiple exposures increase detail and reduce sensor noise. This barn has been here, abandoned, for >50 years. The house was moved or razed.

While shooting, I heard a rustling sound behind me, which gave me a bladder-strength test, as I had been hearing coyotes howling pretty frequently! I slowly turned around to face my "enemy", lit my flashlight, and there was a skunk, 🦨 with tail held high in the air, contemplating whether to waste its scent on this intruder to its domain. We had a 30 second staredown, after which it decided to save its perfume, and it turned and wandered away. What a relief!

Congratulations on your sale!